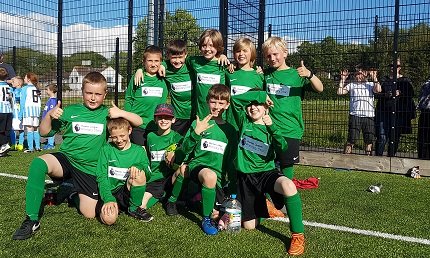 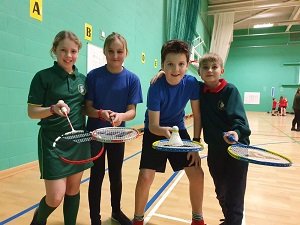 A big well done to Milo,Tom,Allanah,Lily-Mai, Rhys and Chloe for representing the school in the area Year 3 and 4 gymnastics competition at Writhlington on Monday.

Although, it was very nerve-wracking performing in front of all the parents and judges, they all remembered their routines and performed beautifully.

Another fantastic display of teamwork by the Clutton netball team when they played Welton Primary last week in the third round of the BANES netball cup.

A fast moving game kept Mrs Cowgill running up and down the court whilst umpiring and she was as tired as the team by the end!  The shooting practise at lunchtime paid off and the ball was fired into the goal posts in quick succession.

Both teams played extremely well but finished with a final score of 12-6 to Clutton!

This means that Clutton now play Paulton in the quarter finals and we are the last ‘small’ school left in the tournament.

The team and school would like to say a very big THANK YOU to the PTFA for purchasing the wonderful new kit that the team are sporting in the photo. We are sure it helped them perform so well!

The school team took part in the

On Monday 1st April, Mrs Cowgill, Mrs Muckley, Miss Ennew and lots of excited children went to Dance Umbrella at The Forum. The children performed a jazz dance to

‘A Friend Like Me’ from Aladdin, and it was FABULOUS.

Thanks to Mrs Smith, Mrs Piddock and Mrs Boulton, who all helped bring this to life and to ex-pupils Anabelle, Anna and Amelia, who helped every week with choreography.As always, the children represented the school beautifully and were supported by lots of friends and family.

On Thursday 14 th November we played against Farmbrough. It was a good game of football but we lost 4-2. Two well deserved goals soared past our great goal keeper. Some of our players didn’t want to carry on but our amazing coach cheered us on and on so we got ourselves together and conceded two goals. It was probably a very interesting and fun match to watch. It was a good last match for Jonny and we all hope you do well in Australia.

Clutton played St Mary's in the first game of the small schools league and won 10-0. Stan scored a hat trick! The boys showed great sportsmanship throughout the game and were very fair towards other players and each other.

On Tuesday the 9th of October Clutton Primary played st Mary’s. it started at 3:45. Clutton played a somervale secondary school we also met our friends from the Clutton netball team. Playing for Clutton was Riley,Thomas,Jhonny,Kaydan,Sid,Jon Jon,Joseph,Josh and Stan.

Clutton had a few injuries and a few of st Mary’s had some injuries one of them was someone kicked it and they put their hand out and it bent their fingers back *ouch*.  Sid scored 1 Stan scored 3 Kaydan scored 2 Riley scored 2 josh scored 2.

It was a good game st Mary’s played very well the score was 10:0 to Clutton and I would just like to say well done to st Mary’s but it’s all about taking part not winning well done st Marys!

The school currently offers keyboard, guitar and violin through the B&nes music services.